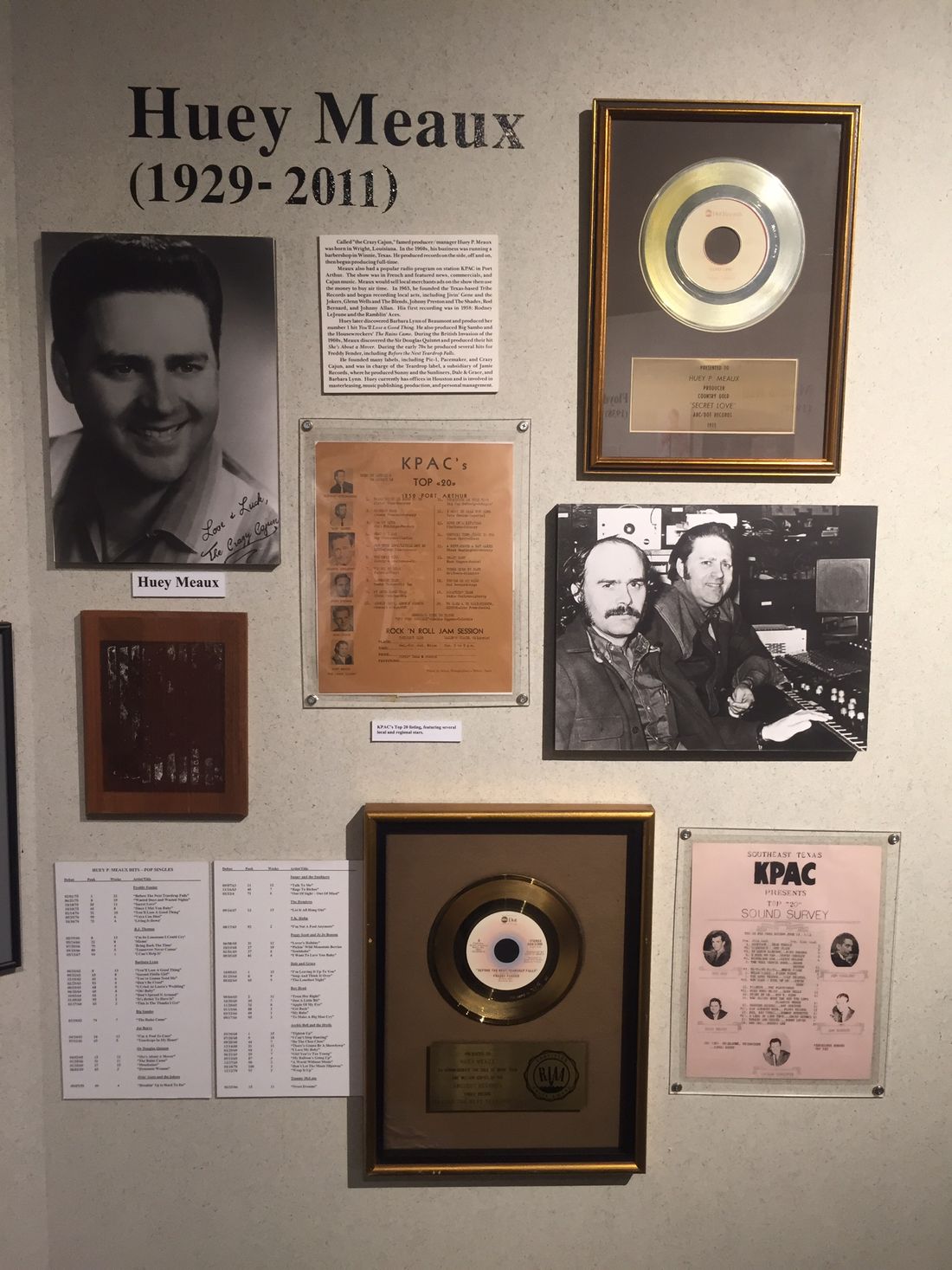 All songs you see on the website are published by Crazy Cajun Music and masters are controlled by Crazy Cajun Records/ Music Enterprises. If you would like further information for the use of these items, please contact us.

During the '50s and '60s and into the '70s the climate in the US was perfect for sharp, independent operators like Syd Nathan of King Records in Cincinnati (the original home of James Brown), the Chess Brothers up in Chicago, Sam Phillips' Sun Records in Memphis and, a little bit later, Huey P. Meaux, the “Crazy Cajun” from Kaplan, Louisiana and Winnie, Texas. Starting in the early 60s, for the next twenty-odd years a steady stream of extraordinarily talented artists recorded with Meaux, a cast that can in many ways be considered as a "Who's Who" of the Gulf Coast music world.

I didn't know it at the time I was growing up but coming to manhood in Houston, Texas put me smack in the midst of one of the world's most eclectic and exciting music breeding grounds of the '50s, '60s and '70s. While much has been written about the glories of the blues-soaked Mississippi Delta and the myriad of sounds that emerged from New Orleans, the Texas-Louisiana Gulf Coast, stretching roughly from Lafayette, Louisiana to Brownsville, Texas, hard by the Mexican border, has produced a musical legacy as least as rich -- and a lot more varied -- than either of those wellsprings.

The musical nexus of this activity, almost midway between Lafayette to the east and Brownsville to the southwest, is Houston, a post-war boomtown. Houston today claims nearly two million residents, almost triple its 1950 population, and is ranked as the 4th most populous American metropolis, exceeded only by New York City, Los Angeles and Chicago. The "Baghdad on the Bayou", as it was termed by local society writer Maxine Messinger, is a sprawling place that encompasses well over five hundred square miles. The world leader in oil refining, Houston today is a far cry from the mosquito-ridden swampland first founded by the Allen Brothers, back in 1836.

The city has always benefited by a "can-do" attitude and remarkably visionary leaders. Take, for example, the Houston Ship Channel, an engineering feat that involved dredging millions of tons of muck from the bottom of Buffalo Bayou. This project enabled the city to boast a deep water port despite being some 30 miles from the Gulf of Mexico. The waterway made it possible for overseas vessels to travel directly to the docks of the many oil refineries lining the Channel to take on their loads straight from the plants. Today the Port of Houston handles well over a hundred million tons of cargo annually, making it the second busiest U.S. port.

The Astrodome, opened in 1965, was the world's first domed stadium and for many years was referred to as "The 8th Wonder of the World". The Astrodome yielded other innovations soon copied worldwide: Astroturf, an "exploding" scoreboard and theater-style seats, at the time a first for a sports facility.

Though not the capital of Texas, the more centrally-located Austin claims that honor, Houston has been the state's largest, most vibrant city since overtaking Galveston in population not long after the turn of the century. Driven first by cotton, then by oil, later by the space program (NASA's headquarters are just down the road at Clear Creek), Houston today has diversified its economy and is a national leader in manufacturing, medicine and agriculture, in addition to its prominent role in aerospace and petrochemicals.

No one would be surprised to learn that Houston has produced numerous country artists, players and songwriters but it will be a shock to some to learn that the city's natives have also writ their names large in blues, rock, soul and Cajun music annals, as witnessed by the dozens of talented artists included in the remarkable Crazy Cajun archives now being presented to the world by Edsel Records of London.

All of the music you'll be hearing on this compelling series can be traced to the genius of one man, a true "crazy Cajun", Huey Meaux, for years the leading independent record producer in Texas or, for that matter, just about anywhere on the Gulf coast, from the south of Florida all the way to Brownsville.

Meaux, born March 10, 1929, was originally from Kaplan, Louisiana, located in the south central part of the state, about thirty miles from Lafayette. The family moved to Winnie, Texas, just outside Beaumont, when Meaux was twelve.

The record business was a wild and woolly affair back in those days, open to anyone with a little money, the "ears" to spot emerging talents and the sense to know what to do next. It was absolutely free from the major label stranglehold in evidence today. By and large radio stations were mostly "mom and pop" places, regional hits were common, "formatted" radio was yet to arrive and the on-air jocks had near total freedom in what they chose to say and play. There were a lot fewer stations on air at the time than the 10,000+ heard in America today!

Thus, during the '50s and '60s and into the '70s the climate was perfect for sharp, independent operators like Syd Nathan of King Records in Cincinnati (the original home of James Brown), the Chess Brothers up in Chicago, Sam Phillips' Sun Records in Memphis and, a little bit later, Huey P. Meaux, the Crazy Cajun from Kaplan, Louisiana and Winnie, Texas.

A barber by day, Meaux also was a DJ and a sometime drummer in his father's band. He kept in close touch with the music around him and first attained national success by producing "Breaking Up Is Hard To Do", for Jivin' Gene & The Jokers (#67 on the pop charts) and "This Should Go On Forever" for Rod Bernard (#20), both in 1959. During the early '60's Meaux produced and licensed additional national hits for Barbara Lynn, Sunny & The Sunliners, Joe Barry, T.K. Hulin and Big Sambo & The Houserockers, all of which were huge successes in the Gulf Coast region.
Huey moved to the Houston area in 1963 and because of his reputation (fuelled in part by his own relentless self-promotion), became a magnet for the region's musicians. During the next twenty-odd years a steady stream of extraordinarily talented artists recorded with Meaux, a cast that can in many ways be considered as a "Who's Who" of the Gulf Coast music world. These CDs, now being issued by Edsel, will bring you classic recordings from Blues masters like T-Bone Walker, Lowell Fulson, Lightning Hopkins and Johnny Copeland, Cajun fiddle wizards Doug Kershaw and Papa Link Davis, fusion rockers Doug Sahm (solo and with the Sir Douglas Quintet), and a very young Sonny Landreth, Clifton Chenier ("The King of Zydeco Music"), soul-pop sensation Barbara Lynn, country hitmakers Ronnie Milsap, Freddy Fender, Mickey Gilley, Moe Bandy and Bob Wills, legendary white soul shouters Delbert McClinton and Roy Head, pop and country chart presence B.J. Thomas, plus New Orleans legends Doctor John and Clarence "Frogman" Henry.

The recordings in the series represent a glorious cornucopia of some of the finest music made in the Gulf Coast region for a twenty-five year slice, beginning in about 1960. Meaux had a keen ear for quality music, some of which became national hits, other sides, of no less merit, were destined for regional or local fame or simply to lay patiently waiting in the vaults, hoping for the chance to be heard that your purchase has now granted. Listen, enjoy and see if you agree that the music of this outstanding series proves that the Texas-Louisiana Gulf Coast can join the Mississippi delta and the New Orleans area as one of our most cherished musical wellsprings!.